Dealing With Collapse: The Seneca Strategy

The ruins of the Egyptian Pyramid of Meidum, perhaps the first large building to collapse in history (*). The collapse of large structures is part of a fascinating field of study that we may call "Collapsology." I already wrote a book on this subject, titled "The Seneca Effect" (Springer and Oekom 2017), available in English and in German. Now, I am writing a second book with Springer which expands and goes more in depth into the matter with the idea of being a "collapse manual" dedicated to how to understand, manage, and even profit from collapses. It should be titled "The Seneca Strategy" and it will be available in 2019.


About 2,000 years ago, the Roman philosopher Lucius Annaeus Seneca wrote to his friend Licilius noting that "growth is slow, but ruin is rapid". It looks obvious, but it was one of those observations that turn out to be not obvious at all if you go in some depth into their meaning. Do you remember the story of Newton's apple? Everyone knows that apples fall from trees, isn't it obvious? Yes, but it was the start of a chain of thoughts that led Isaac Newton to devise something that was not at all obvious: the law of universal gravitation. It is the same thing for Seneca's observation that "ruin is rapid." Everyone knows that it is true, think of a house of cards. But why is it like this?

Seneca's observation - which I dubbed "The Seneca Effect" (or the "Seneca Cliff" or the "Seneca Collapse") is one of the key elements we need to understanding the developments of what we now call the "science of complexity." In the space of a few decades, starting since the 1960s, the development of digital computing has allowed us to tackle problems that, at the time of Newton (not to mention those of Seneca), could not be studied except in a very approximate way.

Using system dynamics, network science, agent-based modeling, and more, this new science has allowed us to penetrate a world that in a certain sense was familiar to us: the world of real things that are born, grow, and sometimes collapse in a ruinous way. The basic ideas in the behavior of complex systems are always the same, especially when dealing with collapses: complex systems are complex because they are dominated by the mechanism we call "feedback." Because of feedback effects, a large structure may collapse when just one of the elements that compose them fails. That may lead to the failure of the elements that surround it. These, in turn, cause the failure of other elements of the system, and so it goes. The result is what we call an "avalanche" and, as Seneca said, "ruin is rapid".

One question I am often asked about system science is, "can we use it to predict the future?" Alas, there is a small problem with this question: we cannot have exact data on the future because the future doesn't exist (yet). But that doesn't mean that we can try to understand the future. After all, what is the future if not a fan of possibilities that we ourselves may decide to turn into reality? Seneca himself would probably have agreed with this concept: he was deeply involved in the Stoic philosophy. As a good Stoic, he knew that we must always be prepared for the future, knowing full well that ruin can come upon us at any moment. This is true for individuals as well as for an entire society. He himself experienced a "rapid ruin" when his former pupil, Emperor Nero, accused him of treason and ordered him to commit suicide. Seneca had no other choice but to comply.

So, we can use mathematical models to describe the Seneca Effect, but they are mainly a quantification of ancient wisdom. It is not a question of predicting the future, it is a question of understanding it. And we can use the models to understand that the ecosystem in which we live is not a supermarket from which we can take what we need - and without even having to pay. It is a complex system, subject to the Seneca Collapse. And since we are also part of the ecosystem, when the ecosystem collapses, we collapse, too. Even a stoic like Seneca would have said that if we have a chance to avoid the climate collapse, we should try.

All these things, and many more, I put them together in the book published in 2017 that I titled "The Seneca Effect." Now I am writing another book that should be called "The Seneca Strategy" -- it should be published by Springer in 2019. This second book is more a "collapse manual" that can be used to manage collapses: that is, it explains how to avoid being destroyed by collapses, how to minimize damage, and even how to profit from collapses (hint: have your enemies collapse first!). What I said in my first book remains valid: collapse is not a bug, it is a feature of the universe! 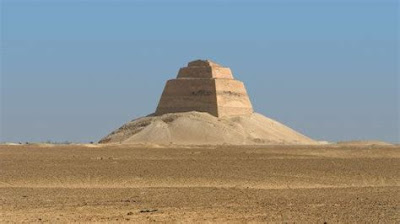 (*) Of course, the collapse of the Meidum Pyramid was an inside job. Look at how the building crumbled: would you believe that it collapsed vertically, all in a symmetric heap? No way. And the witnesses of the collapse say that it fell as rapidly as an apple falls from a tree - which is just impossible. So, it was an inside job devised by Pharaoh Sneferu who had his acolytes strategically placing explosive charges within the pyramid. The Pharaoh wanted the pyramid to crumble so that he could accuse the King of Nubya of having thrown it down by having a charioteer throw his horses against the building at full speed. A classic false flag operation.