The Seneca Effect: how the concept evolved 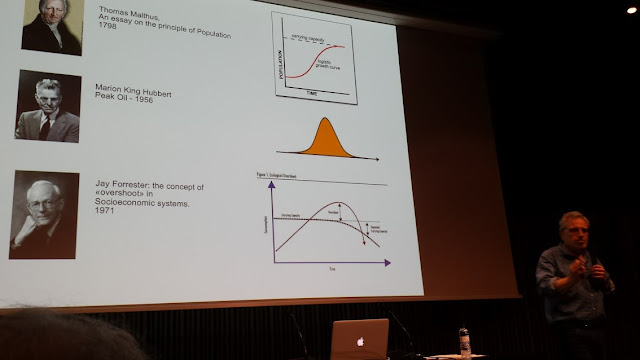 An image taken at a recent meeting in Barcelona. You can see the evolution of the concept of "collapse", from Malthus to Forrester. The latter can be seen as the true originator of the concept that I call the "Seneca Cliff" or the "Seneca Effect"

Malthus (1766 - 1834) is supposed to be the catastrophist in chief, the prophet of doom whose prophecies never came to pass. And yet, if you read what he wrote (not everyone does), you see that he never mentioned the concept, familiar to us, of "civilization collapse". Malthus was perfectly able to imagine pestilences, wars, and famines; all common occurrences at his time. But he wasn't aware of the idea that population could grow well above the "Malthusian limit" and then crash.

The idea of a cyclical pattern of growth and decline came much after Malthus, you find its origins in biological studies, with Lotka and Volterra being perhaps the first to propose it in the form of a mathematical model in the 1920s and 1930s. Later on, in the 1950s, Marion King Hubbert proposed his "bell-shaped" curve for the cycle of production of crude oil in a specific region. For us, it is a relatively well known story even though most people seem to remain convinced that - somehow - growth can go on forever.

Finally, the idea that the bell shaped curve is asymmetric was explicitly expressed in terms of a mathematical model by Jay Forrester, in the 1960s, Even though Lucius Annaeus Seneca had already proposed it in qualitative terms long before, Forrester can be seen as the true originator of the concept of "Seneca Cliff."

Over more than a century of work, humankind has developed tools that make us able to face the future. We only have a little problem: we are not using them; our current leaders don't even know that such tools exist. And so, our destiny is to slide down, blindfolded, along the Seneca Cliff.