Are they just scamming us, or are they experimenting with us? 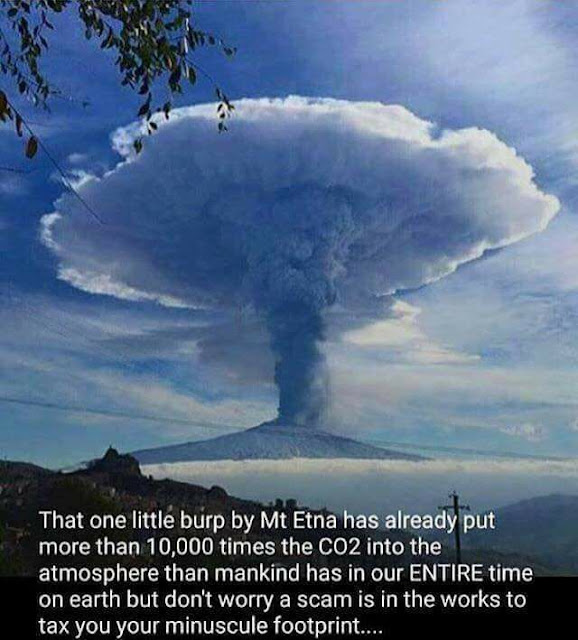 Sometimes I have the impression that they are not just fooling us. They are experimenting with us to see how we react. Do you remember the experiments that Konrad Lorenz would do with geese? Fooling them to follow a puppet as if it were their mother? Something like that.

Sometimes, the sheer amount of idiocy involved in certain messages makes you wonder. See the example above. A "little burp" from Mt. Etna, supposed to have bee spewing "10,000 times" more CO2 into the atmosphere than the whole amount emitted by humankind.

Now, the picture of the volcano seems to be a scam in itself. It comes from a Facebook site defined as "Fantastic World Collection" and the title doesn't seem to promise strict guidelines for presenting only real photos. This one looks heavily retouched, if not completely fake. But that's a minor problem. Consider the text, come on, "10,000 times"? And won't anyone feel the need for a minimal fact check of this number before diffusing this image on Facebook as the obvious proof that human caused climate change is a hoax? And yet, people do that. This photo arrived to my Facebook account with exactly this kind of accompanying message.

That minimal fact check would lead anyone to discover that volcanic eruptions emit, at best, about 1% of the CO2 emitted by humans. This comes from the very first hit on Google on this matter. 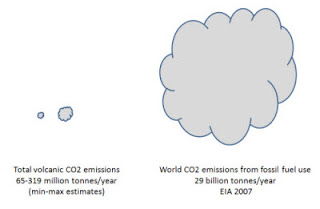 So, the claim in the figure with Mount Etna is wrong of about a factor one million. But what's such a little discrepancy among friends? As I noted in another post, the fact that these claims are so blatantly absurd is not a bug, it is a feature. They are not aimed at normal people; they are studied for identifying and selecting suckers. And suckers are very useful for many things, in politics as well as in commerce.

I go a little farther than that and I tend to think some of these absurdities don't even have specific commercial or political purposes. They are experiments, tests to probe the level of human gullibility; designed to collect data that then could be used for more important and darker purposes.