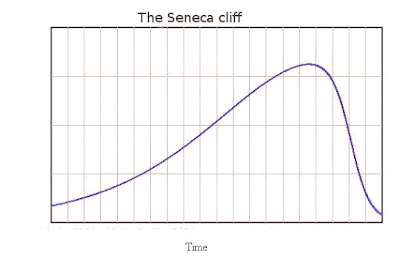 The concept of the "Seneca Cliff" seems to have gone mainstream. Below, it is mentioned in a recent post by Dennis Coyne on "peakoilbarrell" as an obvious concept. Just as when you say "Gaussian Curve", you don't have to specify what shape the curve has, so it is for the "Seneca Curve". It looks like I started some kind of avalanche with my 2011 post when I introduced the term. See also my blog wholly dedicated to the subject.

Here, the projections by AEO (annual energy outlook) seem to me very optimistic; can production really keep growing until 2035-2040? If that were to happen, however, the subsequent collapse would be truly abrupt.

The scenario above shows an Oil Shock Model with a URR of 3600 Gb and EIA data from 1970 to 2015 and the Annual Energy Outlook (AEO) 2016 early release reference projection from 2016 to 2040. The oil shock model was originally developed by Webhubbletelescope and presented at his blog Mobjectivist and in a free book The Oil Conundrum.
The World extraction rate from producing reserves must rise to 15% in 2040 to accomplish this for this “high” URR scenario. This high scenario is 100 Gb lower than my earlier high scenario because I reduced my estimate of extra heavy oil URR (API gravity<10) to 500 Gb. The annual decline rate rises to 5% from 2043 to 2047 creating a “Seneca cliff”, the decline rate is reduced to 2% by 2060.