Why have newspapers become so bad? There is a reason: it is another case of the "Seneca effect" 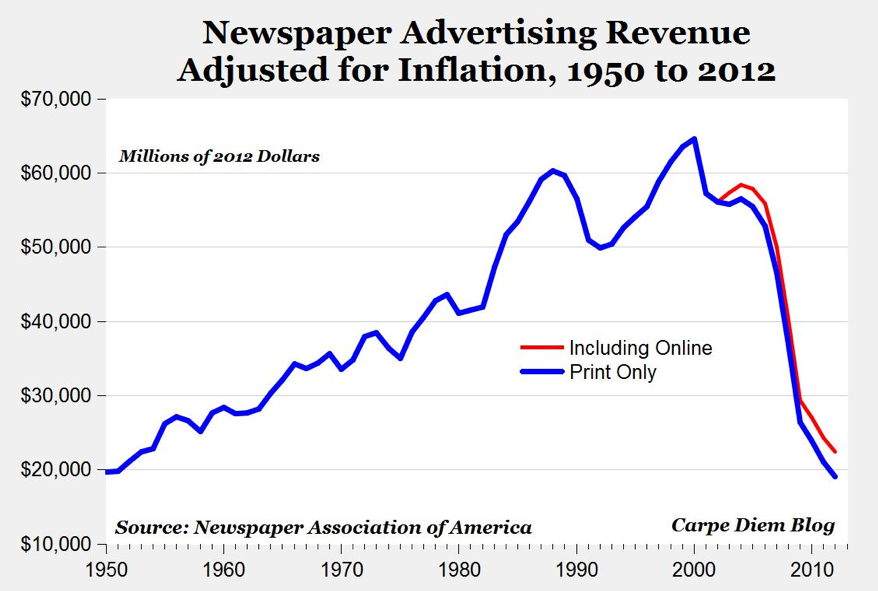 You probably have noticed the decline in the quality of newspapers. Actually, it is not just a decline, it is a true collapse: news are not verified, legends are published as fact, important issues are neglected in favor of gossip and let's say nothing about the way some crucial problems such as climate change are neglected and mispresented. There is a reason: as you see in the figure above, newspapers have rapidly lost a large fraction of their revenues in the form of advertising. In short, newspapers are a living example of what I called the "Seneca Effect", which states that "ruin is rapid." (Image by Mark J. Perry from the American Enterprise Institute.)

By now, you may think that I am becoming a bit fixated with this idea of the "Seneca Cliff", but the image above is so impressive that I just had to show it here. In previous posts, I described how decline could be much faster than growth (the "Seneca Effect" - see the graph on the left) in several historical cases involving the exploitation of natural resources. In these cases, the rapid collapse is the result of the attempt of operators to keep production constant or increasing, and hence overexploiting the resource.

So, we have here a good illustration of the ubiquity of Seneca's observation that "the way to ruin is rapid", but also a different case than that of the exploitation of natural resources as - say - shale oil (which is, by the way, starting to show a very nice "Seneca Cliff"). Nevertheless, all human economic activities have to do with the exploitation of resources of some kind. In this case, the resource being exploited is the capital available for advertising.

We can see the effect of the competition between Social Media and Newspaper advertising as a classic case of the "Gause's law of competitive exclusion", well known in biology. It says that when two species compete for the same resources, one will usually go extinct. This is what's happening with the two "species" which are Newspapers and Social Media - the first is probably going to be extinct soon.

Below, I'll show you a simple model on how we can simulate the competition of  two species for the same resource. But, intuitively, we do expect that the collapse of the less efficient species should be abrupt. We can imagine that the old species (say, foxes) had found some kind of homeostatic equilibrium with its source of food (say, rabbits) and then, suddenly, the new species appears (say, wolves) which catches rabbits much faster and more efficiently. It is disastrous for the foxes, which go extinct quickly.

This is not just theory, think of what happened when the Europeans arrived in the Americas with their firearms. It was a disaster for the local people - less efficient than the Europeans in the art of war. Not a nice story to tell but, unfortunately, this seems to be the way the world works.

A simple model of Gause's law applied to advertising.
by Ugo Bardi

Here is the model's representation made using the Vensim software: 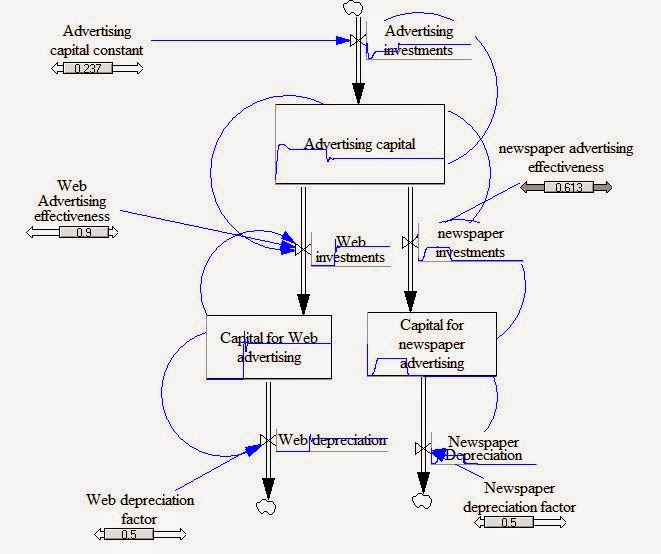 The model is built using simple assumptions which make it similar to the well known "Lotka-Volterra" (LV) model. It starts from an "advertising capital" (rabbits in the LV model), which is consumed by capital specifically dedicated to internet advertising (foxes in the LV model), assuming also that growth is quadratically damped, as it is often done in the LV model. There are two species in competition, Web and Newspaper advertising ("foxes" and "wolves") of which one starts with much lower numbers but with a higher efficiency of capital consumption. This second species appears as a "pulse" at about one third of the simulation. The result is that the first species (Newspaper advertising) reaches homeostasis, but collapses rapidly when the second species (Web advertising) enters into play. Here are the results of the investments on newspaper advertising 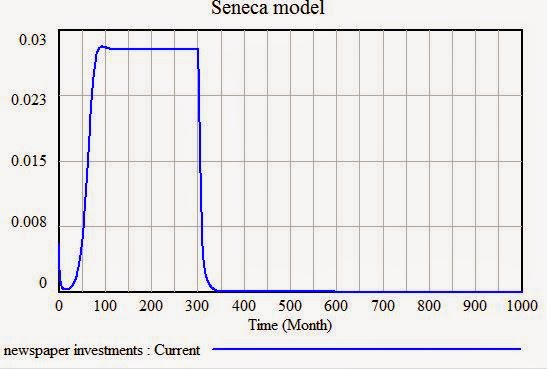 This is just a stab of a model, put together in an hour or so. Don't take it for more than that, but I think it does capture something of the system being modeled. For details write to me at ugo.bardi(zingything)unifi.it. I can also send to you the complete model.

Seneca's gamble: why the road to ruin is rapid 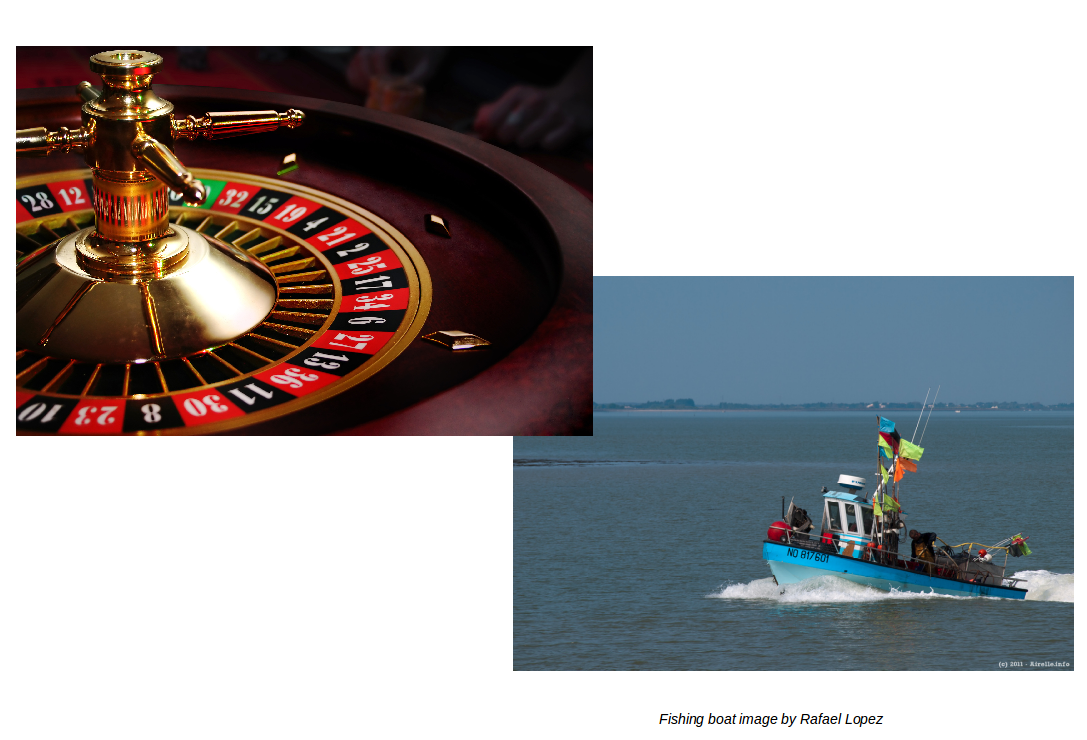 Why people can so easily destroy the resources that provide their livelihood? Fishermen, for instance, have destroyed fisheries over and over, and every time they refused to take even the most elementary precautions to avoid disaster. Eventually, I came to think that it is related to a basic miswiring of the human mind: the "gambler's fallacy". Fishermen, it seems, see fishing as it were a lottery and they redouble their efforts thinking that, eventually, they will get lucky and strike it rich. Alas, it doesn't work in this way and all what they obtain is to destroy the fish stocks and create a spectacular collapse of the fishing yields. This way of creating one's own ruin could be termed "Seneca's gamble", from the words of the Roman philosopher Lucius Annaeus Senecawho stated that "the road to ruin is rapid".

The "Martingale" is a strategy to be played with games which have a 50% chance of winning. It consists in doubling one's bet after every loss, believing that, eventually, a win will pay for the previous losses and provide a gain.

The Martingale is an example of the "gambler's fallacy". Typically, gamblers tend to think that some events - such as the numbers coming out of the wheel in the roulette game - are related to each other. So, they believe that, if the red comes up several times in a row, it is more probable that the black will come out the next spin. That's not true, of course, and the Martingale is a surefire way to ruin oneself, and to do that very rapidly. Nevertheless, many people find the idea fascinating enough that they try to put it into practice. It is the effect of a bad miswiring of the human mind..

The gambler's fallacy may explain some aspects of the human behavior that would be otherwise impossible to understand. For instance, in a previous post I was showing this figure, describing the yields of the UK fishing industry (from Thurstan et al.).

Compare the upper and the lower box, and you'll see that the fishing industry was ramping up at an incredible speed their "fishing power," just when fishing yields had started to decline. Note also how they still had a lot of fishing power when the fisheries had all but collapsed. How could it be that they kept fishing so much even when there was little or nothing left to fish?Thinking about this matter, we can only come to the conclusion that fishermen reasoned like gamblers at a betting table. In other words, they were playing a sort of "fishing Martingale", doubling their efforts after every failure.

Gamblers know - or should know - that casino gambling is a negative sum game. Yet, the gambler's fallacy makes them think that a streak of bad results will somehow increase the probability that the next bet will be the good one. So, they keep trying until they ruin themselves.

Now, consider fishermen: they or should know  that, at some point, the overall yield of the fishery has become negative. But, like gamblers playing roulette, they believe that a streak of bad luck will somehow increase the probability that the next fishing trip will be the good one. So, they keep trying until they ruin themselves.

The mental miswiring that gives rise to the behavior of gamblers and fishermen can create even larger disasters. With mineral resources, we are seeing something similar: operators redoubling their efforts in the face of diminishing returns of extraction; the story of "shale gas" and "shale oil" is a typical example. Maybe it is done hoping that - somehow - the destruction of one stock will increase the probability to find a new one (or to create one by some technological miracle). So, instead of trying to make mineral stocks last as long as possible, we are rushing to destroy them at the highest possible rate. But, unlike fish stocks that can replenish themselves, minerals do not reproduce. Once we'll have destroyed the rich ores that created our civilization, there will be nothing left behind. We will have ruined ourselves forever.

In the end, the gambler's fallacy is one of the factors that lead people, companies, and entire civilization to a rapid collapse. It is what I have called the "Seneca Cliff" from the words of the ancient Roman philosopher who first noted how "the way to ruin is rapid". In the case described here, we might call it the "Seneca gamble" but, in all cases, it is a ruin that we create with our own hands.