The financial collapse as an example of a "Seneca Cliff" 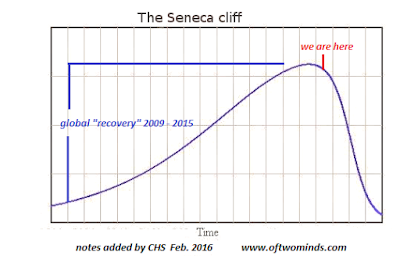 The concept of "Seneca Collapse" has been discussed by "Zero Hedge" where Tyler Durden reproduced an article previous appeared on Charles Hugh Smith's site. Smith says:


I propose that the Global Recession of 2016 will trace the Seneca Cliff as described by Ugo Bardi.  ... I think a strong case can be made that the global financial/economic system is primed for a ride down the Seneca Cliff.


This makes a lot of sense. In the hierarchy of complex systems, the financial system is, indeed, one of those most easily prone to collapse. Many biological and social systems have built-in systems to manage emergencies and counter the external perturbations that may send the system off balance. In biological systems, we have, for instance, the immune system; in the social systems we have the army, the firemen, and others. But the financial system has none, at least none that is built in the system. Actually, it may be argued that the world's financial system is purposefully built in order to be unstable, even though external entities - governments - may try to stabilize it.


Of course, the application of the Seneca phenomenon to the financial system is somewhat different from the model I developed. A better model for financial collapse could be developed, probably, starting from the punctuated collapse model of complex networks developed by Bak et al. But, in the end, it is the same phenomenon: the rapid collapse of complex systems is a property of connected networks; where the breakdown of one or more links may generate a cascade of broken links that brings the system down to a lower complexity state. In my model, there are only three nodes in the network, but that's enough to generate a rapid collapse.

But what are these models for? The concept of the Seneca collapse applied to the financial system is not so much a tool for predicting something. We know that financial collapses have already happened in the past and we won't be surprised if they will happen again in the future. Models are, instead, a framework for understanding the reasons of collapse. The main message, in this case, is that most complex systems are fragile and tend to collapse, unless there exists something that operates in order to stabilize them. And a problem of conventional economics, as Smith notes, is that:

Is it a problem? Maybe not so much, at least in the long run. Fragile systems collapse and disappear, resilient ones tend to survive and take over. It has always been like that, it is called natural selection. Eventually, by trial and error we'll learn how to manage complex systems. It won't be painless but, on the other hand, no one ever said life was fair. Just eventful.