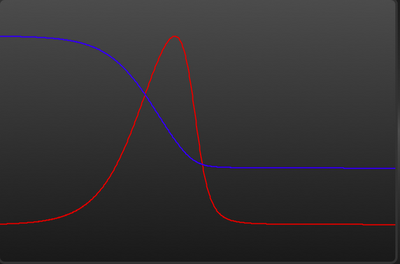 My post on the "Seneca cliff" has inspired Hannes Rollin to create an App for the iPad that can be used for running the model for different input parameters. I must confess that I don't own an iPad, so I can't test the model, but it seems to me a very interesting idea. So, here is the story, with many thanks for Hannes for his interest in my work.

Many of you who are reading this post may be familiar with one or the other of Ugo Bardi's mind-sized models, where he employs system dynamics to illustrate fundamental economic and natural processes in a general way. The model which impressed me the most was the one Ugo called Seneca's Cliff – a very simple model capable of generating an economic decline much faster than previous growth had been, a fact already remarked by Seneca. Hence the name.

I give you a quick summary of the model. You have three stocks (imagine them as containers), namely Resources, Economy and Pollution. Now, a given fraction of Resources is extracted and used to run the Economy. Subsequently, a fraction of the Economy spawns Pollution. The flow is furthermore dependent upon degradation or restoration (negative degradation) of each stock. If you ever asked yourself where the nice curves come from, here is the answer: The content of the stocks is plotted against time.

Ugo tweaked the parameters to give a Resource depletion and Economic activity curve very similar to one of the more famous outputs of the WORLD3 model of the Limits to Growth team. I have set this result as the default settings of the iPad app. 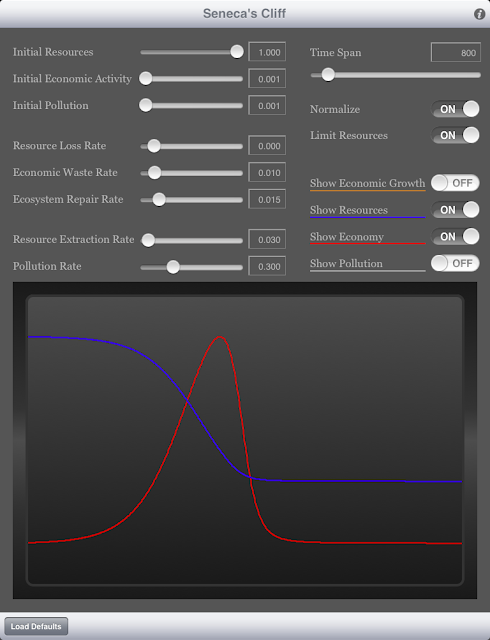 The interesting thing is that the model can evolve scenarios quite distinct from the standard run above. If you model a renewable Resource stock with negative resource loss rate, you get a (potentially infinite) sequence of boom-and-bust cycles similar to H.T. Odum's simulation of locust pests. 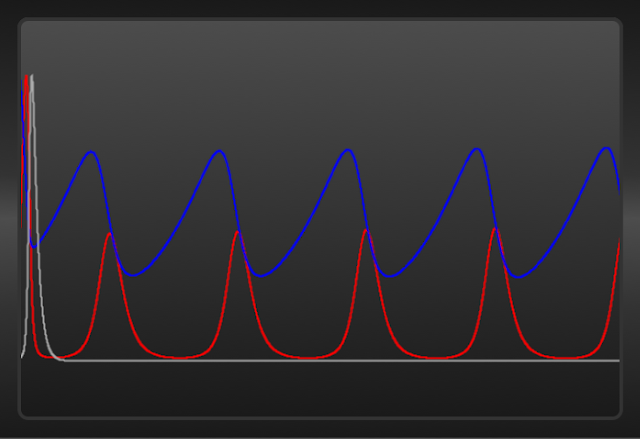 Although this run looks catastrophic as well with long periods of almost zero economic activity, it already maintains two highly optimistic assumptions: First, resources are strictly renewable no matter how much strained, and second, that pollution (gray), which spikes sharply according to the initial economic peak, is handled completely by natural self-repair.

It is even possible to create something like a steady-state economy, a slightly meandering stream of low but positive activity. When you play with the app, however, you will see that combinations of parameters leading to such favorable circumstances are hard to find, and the solution is highly unstable – wiggle any slider in any direction, and you are quickly back to extinction or boom-and-bust. 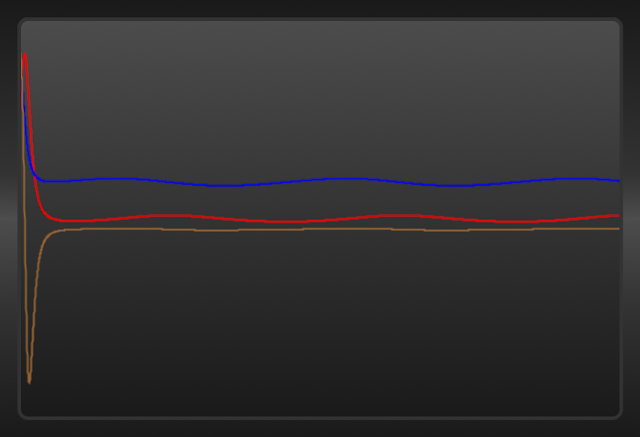 Note that in this run high growth is followed by rapid decline and finally zero
growth (brown). The steadiness of the Economy has its price: economic activity is pretty low compared to the once-in-a-lifetime peak at the beginning, and the Resource stock never again reaches its initial wealth due to continual harvesting. The are many more scenarios this simply excellent model can provide, for instance two or three consecutive peaks of activity, increasing or decreasing, followed by die-off (stable solution) or steadiness (unstable solution).

As an apology, I am certainly aware of the irony of porting a model for the simulation of economic decline to the flagship of techno-narcissistic consumerism, klickibunti self-distraction, and perpetual remote controlling of human resources. But, you know, the spirit speaks in many tongues. There is certainly something to gain by playing with the model rather than merely studying formulas or staring at static graphs. Just like the Pythagoreans presumably played with pebbles to gain a feeling for the relation between triangles and squares, you may develop a feeling for the precariousness of stability and, perhaps, understand how inevitable and fierce a destiny is able to fulfill itself.

This said, I would only wish to add that the app is, of course, free, and anyone who wants to learn the background or extend the model is invited to mail me (Hannes Rollin) at initials at sabik dot de. The Seneca cliff App has recently been approved to App.